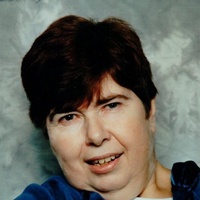 Cheryl Haensel passed away peacefully with her family and special friends by her side on October 18, 2018.

Cheryl was born to Merle and Lois (Gordon) Haensel at the Tracy Hospital on October 1, 1949. Cheryl graduated from Bridgewater High School in 1968.

As a young woman, she worked as a nanny in Minneapolis and drove a car for several years until her health complications prevented her from living independently. She began working at Sioux Vocational (now known as LifeScape) in Sioux Falls over 31 years ago, and made many friends and had many memories from her interactions over the years. Over 20 years ago, she moved into a group home setting in Sioux Falls, where she thrived and made many friends as well. She was never shy to let people how she felt. Cheryl was sassy, she loved sweets, Diet Pepsi’s, and stuffed animals. Her favorite things to do with her caregivers were spending time at family gatherings, concerts, Canaries games, Steak-Out dinners, and trips to Walmart.

Cheryl’s family is especially grateful for the support and love given to her from her friends and caregivers at her group home on Stephen and LifeScape employees over the years.
To order memorial trees or send flowers to the family in memory of Cheryl Haensel, please visit our flower store.