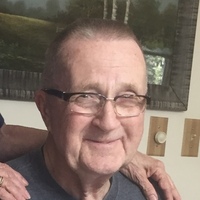 Charles was born July 22, 1935 to Ivan and Marie (Bose) Holm in Nebraska. His education included some country schools and in the town of Laurel, Nebraska. Chuck began working as a young man at a gas station in Norfolk. He moved to Sioux City and worked at the packing plant for a few years and then began working at American Optical where he was trained in a highly skilled position grinding prescription lenses. He also worked with Sioux City Optical which was acquired by Walman Optical. Chuck married Janet Eberly and they had two children, Dan and Kathy.

In the late 1970’s, Chuck transferred to Sioux Falls when Walman open a new store. He managed optical business in Sioux Falls for almost 20 years before he retired. He kept himself busy tinkering with projects around the home and learned how to weld. Chuck also worked for the Burpee Seed Company for several years keeping their retail displays stocked.

He loved spending time with his family and his dogs.

Chuck is survived by his wife, Janet; two children, Dan and Kathy; a granddaughter, Dani; and two sisters, Alyce Blank and Joyce Miller. He is preceded in death by his parents.

No services are planned at this time.

To order memorial trees or send flowers to the family in memory of Charles “Chuck” Holm, please visit our flower store.