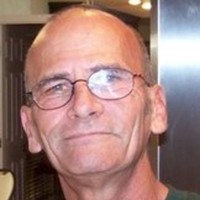 Charles (Chuck) Buehner, 67, passed away on February 16th, 2020 in the VA Hospital in Sioux Falls, SD after a courageous battle with cancer.

Born Charles Ardell Krabbenhoft on December 5th, 1952 to Charles and Carol Krabbenhoft, Chuck was the oldest of 6 biological siblings, all of whom found themselves in foster care at very young ages.  Charles was taken in by Frieda and Henry Buehner around age 9, where their HU ranch north of Dunn Center, ND would become “home”.  He attended schools in Dunn Center and Killdeer, ND. He spent his time as a boy spending countless hours looking for arrowheads and other Native American artifacts – and fishing?  Chuck never turned down an opportunity to cast a line!

In 1971, he married Beverly Andriash and welcomed a son, Charles Jr. (Charley). They stayed on the HU ranch until 1973 when the Army gave him the chance to give something back to his country. They brought him to Fort Leonard Wood, MO where boys become soldiers, and he was later stationed in Fort Carson, CO.

Chuck married June Phelps around 1975, and they brought two sons, Chris and Shane, into the world. In 1980 he married Nancy Bergstrum and they had a son, Travis. In 1986 he joined Shelly Malwitz and welcomed another son, Chase, and his first daughter, Brandy.

After the Army, Chuck held many different jobs in many different states. Most centered around his lifelong passion of cars, working construction, or remodeling.  Chuck called many places “home” over the decades, but Dunn Center ND, Sioux Falls SD, and Fort Myers FL were always closest to his heart.

Chuck loved animals, classic cars, Runescape, friendships, flirting and family. He spent years trying to find all of his biological siblings who were separated from him as a child, and he was very grateful that he eventually reconnected with all of them.

He is proceeded in death by his adopted parents Frieda and Henry Buehner and their first son Angelo, along with his birth parents Charles Krabbenhoft and Carol Eman.

Tom and Pati Youts, Theresa, Sherry, Gary, Fred, and Anita all held a very special place in Chuck’s heart and life, as did his new friend Amber and so many other cherished friendships.

To order memorial trees or send flowers to the family in memory of Charles Buehner, please visit our flower store.