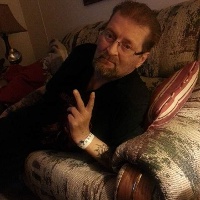 Chad was born on December 7, 1967 at Worthington, Minnesota, the son of Gary and Ginger (Behrens) Highstrom. He grew up in Sioux Falls and graduated from Washington High School.

Chad lived and worked in the Sioux Falls area most of his life. He loved motorcycles and enjoyed woodworking.

A private family service will be held at Hills of Rest Cemetery, Sioux Falls.

To order memorial trees or send flowers to the family in memory of Chad Highstrom, please visit our flower store.