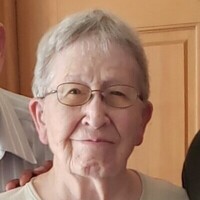 Catherine Ann Ness was born November 29, 1932 to Lewis L. Ness and Mathilda Iverson Ness in Brookings County, South Dakota. Catherine attended District 55 rural school in Brookings County for through the 8th grade and then Brookings High School where she graduated in 1948. She then enrolled at Augustana Academy in Canton from 1948-1950.

After graduating from the academy, Cathy attended Lutheran Bible Institute in Minneapolis for one year and errolled at Concordia College in Moorhead, Minnesota where she majored in music and elementary education.

Her first teaching position after graduation was joining the faculty at Augustana Academy as and instructor in piano and organ from 1955 – 1958. During those three years, Cathy also served as the organist at Canton Lutheran Church. The next two years were spent at Newell, Iowa, teaching elementary school music and serving as organist at the Baptist church. Cathy’s next teaching job was at St. James, Minnesota as the school music director for two years and then taught 5th grade for two years. While in St. James, she was the organist at St. James Lutheran Church.

Cathy returned to Concordia College in 1954 for an additional semester of elementary education credits. She filled second semester 3rd grade teaching vacancy at Owatonna and continued teaching through the next school year.

Cathy then decided to change careers and honed her secretarial skills, first taking a civil service job with the Hennepin County Draft Board in Minneapolis. She then worked for the Minnesota Council of Church and later at Honeywell. She even squeezed in a couple of years of teaching at Anoka, Minnesota.

Her life took a major change in 1972 when Cathy renewed an acquaintance with Wilson Bamesberger, a farmer from Selby, South Dakota, whom she had met four years earlier when she was the organist for his sister’s wedding. They were married on October 21, 1972 in Brookings and settled on Wilson’s farm where they lived for 20 years. They adopted two sibling boys, ages 5 and 7, from Seoul, Korea. Wilson and Cathy moved to Sioux Falls in 1992.

Cathy worked at Good Samaritan Village as a CNA and then as a companion aide for Sanford Home Health for 18 years. Cathy and Wilson are founding members of Living Word Free Lutheran Church in Sioux Falls where applied her musical talent.

Cathy is survived by her husband, Wilson; two sons and daughters-in-law, Jim and Sonya of Ft. Polk, LA, and Alan and Felicia of Ft. Carson, CO; six grandsons, three granddaughters and two great grandsons. She was preceded in death by her parents and two brothers, Laurelle and Elvin.

To order memorial trees or send flowers to the family in memory of Catherine Bamesberger, please visit our flower store.