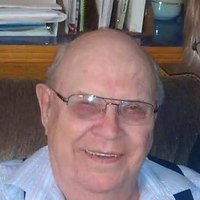 Carl was born on November 8, 1928 to Ezra and Minnie (Nohrenberg) Nevins in rural Yellow Medicine County, Minnesota. He grew up on the family farm and helped with the farm work until 1953, when he joined the Army. When Carl was discharged, he returned to the farm and worked with his brother, Ruben.

Carl was married Agnes in 1956 and continued farming near Strandburg, South Dakota. His son, Daniel, was born in 1958. During this time, Carl also worked for Haletts Construction near Watertown for several years.

Carl played the accordion for may years. He enjoyed playing Pinochle and board games.

Grateful for having shared in his life are his son, Dan of Sioux Falls; grandson, Jason (Abbey) Nevins; granddaughter, Dawn (Jake) Tysdal; and great grandchildren, Audrey and Miles Nevins, Haylie and Logan Tysdal and Spencer; and special friend, Arlis Basel.

Carl is preceded in death by his parents; a brother, Ruben; two sisters, Alvina Benson and Olie Benson; and a grandson, Bryan Harms.

To order memorial trees or send flowers to the family in memory of Carl Nevins, please visit our flower store.