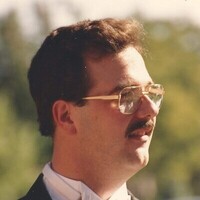 Cameron Michael Gundrum was born on Friday, October 31, 1958 at Cedar Rapids, Iowa, the older of identical twins born to James and Frances (Lathrop) Gundrum. Cam and his brother, Stanley Meredith Gundrum, were baptized on Saturday, All Saint’s Day by their parents, the Rev. James and Mrs. Frances Gundrum. Stan died the next day, All Soul’s Day 1958.

Cam was raised in Iowa (Cedar Rapids, Chariton, and West Des Moines). Cam was involved in Boy Scouts (pine car derby winner one year, if I remember correctly) when he was younger, loved bike riding (especially on the gravel driveway of the church next door to the rectory we lived in – he grew his mustache because that gravel gave him a pretty good scar on his upper lip), camping with the family for a month each summer, and learning how to play guitar. In the early 70s, Cam joined DeMolay, a Masonic organization for young men, and rose to the rank of Master Counselor of his chapter.

As a preacher’s kid, Cam of course did the obligatory time in acolyte’s robes, but found his love of music and his faith joined into a great love of singing in the church choir. His strong tenor could be heard in many church services from his school days on.
In junior high and high school, Cam took up the coronet – a slightly smaller but warmer, richer sounding trumpet and played in concert and marching band. He also played guitar in the school jazz band and sang 3 years in Valley Singers, the top choir at Valley High School. He also sang in the school Men’s Choir and Acapella Choir and was active in the high school theater as well; most notably, he won the part of Mr. Bumble, the high tenor workhouse owner in the musical “Oliver!” Cam continued his education at the University of Iowa where he earned his BS in 1981 and his JD in 1983.

Cam decided that the law profession was not what he was called to do in life and took his skills and talent into the business world. He continued with his love of music, and for a while was lead guitar in a Country Rock band. He played everything from James Taylor to Peter, Paul, and Mary, to Mason Williams’ “Classical Gas.” He sang in the choir at Calvary Episcopal Cathedral and played guitar during the Christmas services. Cam also served as a Senior Warden for the church.

Cam married Lynette Kortlever on September 15, 1990. He became a dad to Marie, Katie, and Jared in all ways that are important, and even if they didn’t carry his blood, they carried his heart. He loved being a father; he changed diapers, wiped runny noses, helped with homework, and was proud of his children. He even more enjoyed becoming Papa to his grandkids, watching the things he and Lynette had instilled into one generation being passed down to the next.

As the cancer grew within him, Cam would slowly lose the use of his voice and his right arm. He tried to “Iowa Stubborn” his way through so many phases of life. Then he found love and more in South Dakota, where he can finally rest. Cam died on Sunday, July 3, 2022, surrounded in love and in the presence of family. Now that his voice is silent, we will have to take up his music for him, play instruments and CDs, sing silly and serious songs, and “make a joyful noise.”

To order memorial trees or send flowers to the family in memory of Cameron Gundrum, please visit our flower store.