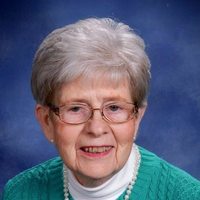 Beverly Darlene Winter was born on July 4, 1930 in Sioux Falls, South Dakota, the daughter of Alva and Lila (Spade) Paul. She graduated from Washington High School in 1949.

Bev married Walter Winter on February 11, 1949 in Luverne, Minnesota and they lived in Sioux Falls. In 1956, Bev and Walter moved to Oelwein, Iowa where Bev worked at a grocery store for a few years. They returned to Sioux Falls in 1968. Bev worked at US Bank in Sioux Falls for nearly 20 years and held several different jobs with the bank during her tenure.

She was an active member at First Lutheran Church where she helped with offerings, communion, bazaar and in the music library. Bev enjoyed attending the bible study classes. She liked traveling to Arizona for vacation.

She has been living at Prairie Creek Assisted Living for the past year. Bev was 89 years old when she passed away on October 18, 2019 at Ava’s House in Sioux Falls

Grateful for having shared in her life are her daughter and son-in-law, Paulette and Bill Jensen of Sioux Falls; three grandsons and their spouses, Max and Maren Jensen, Alex and Nicole Jensen and Samuel Jensen and his fiancé, Maria Harrington; three  great grandchildren, Carsten, Blakely and Jack; three sisters, Shirley (Bob) Wiese, Nelda Vellek and Rae Jamison.

She is preceded in death by her parents and her husband, Walter, in 2002.

To order memorial trees or send flowers to the family in memory of Beverly Winter, please visit our flower store.