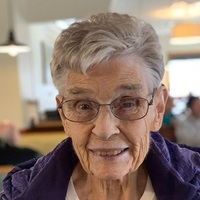 Berniece was born September 26, 1928, in Mitchell, SD to Fred and Elizabeth Hendricksen.

She graduated from Mitchell High School and received her RN degree from Methodist School of Nursing in Mitchell. Berniece married William “Bill” Preston on September 1, 1949, and they lived in Mitchell until 1986 when they moved to Sioux Falls.

Berniece worked as an RN at the Methodist Hospital in Mitchell for most of her career, usually during the evening hours so she was home during the day with Bill and her girls.  Berniece was a woman who loved and was loved fiercely, and she and Bill raised four resilient women together.  She delighted in cooking for her family.  Pies were her specialty if you had the pleasure of eating it and all others paled in comparison.  She also loved receiving mail and answered every letter from family and friends.  Bill and Berniece loved going to dancing together.  Berniece lived at Primrose Retirement Community the last several years and enjoyed playing bingo and working on puzzles.

To order memorial trees or send flowers to the family in memory of Berniece Preston, please visit our flower store.