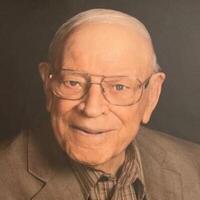 Baltus “Fritz” Fritzemeier, 99, of Sioux Falls, SD, died December 9th at the Neighborhoods at Brookview in Brookings. He was married to Miriam Smith on June 12, 1950 in Alpena, SD. They were blessed with 4 children: 2 girls and 2 boys.

Fritz was born to Yeltze and George Fritzemeier on September 1, 1922 in Mt. Vernon, South Dakota. He graduated from Mt Vernon High School and from Dakota Wesleyan University. Due to WWII, he left school and enlisted in the Army in 1943.

Fritz served in the Army until May of 1946. He served in the 4th Armored Division under General Patton as a tank commander and participated in the Battle of the Bulge. His first coaching experience was in the Army after the war. He attained the rank of Master Sargent. Upon discharge, he returned to Dakota Wesleyan to complete his college degree.

At Dakota Wesleyan, Fritz lettered in football, basketball, and track. He also played baseball for the Mitchell Kernels in South Dakota Amateur Baseball. While he loved all sports, his first love was baseball where he was an outstanding left-handed pitcher and first baseman. He spent over 20 years building the VFW Teener Baseball Program and serving the City of Sioux Falls Recreation Department managing the city’s age 8-12 baseball leagues.

Fritz began as a teacher and coach in Ethan, SD, then moving to Wagner, SD and finally Sioux Falls. He taught first at Patrick Henry Junior High and then switched to Washington High School. He retired in 1983.

His list of accomplishments is too vast to include in totality. He was inducted to both the Washington High School and Ethan High School Halls of Fame. His 1971 Washington Warriors Boys Basketball team won the state tournament and he was named Siouxland Basketball Coach of the Year. He was honored with the Howard Wood Relays 25-Year Service Award in 1983. Fritz and Miriam were founding members of Hilltop United Methodist Church.

He dearly loved his four children and inspired them to build lives of commitment, service and love. He is deeply missed.

He was preceded in death by his wife, his parents, his brothers Harke and William, and his sister Ann.

To order memorial trees or send flowers to the family in memory of Baltus Fritzemeier, please visit our flower store.