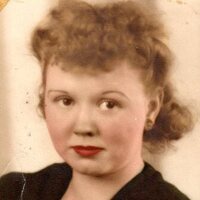 Arlene was born on October 17, 1927 at Pulaski, NY, the daughter of Albert and Edna (Look) Widrig. She graduated from Mexico High School at Mexico, New York in 1944.

Arlene married Charles Miner on March 1, 1946 in Buffalo, New York. They moved to Sioux Falls in 1949 where Charles was stationed with the Air Force.

Arlene worked at McKennan Hospital for 10 years and then at the Good Samaritan Center for 15 years. She also worked at a daycare and Harold's Photo before retiring.

She loved her pets and fostered a number of cats and dogs. She enjoyed feeding the birds and squirrels and growing flowers.

She was preceded in death by her parents, husband and a grandson, Michael.

To order memorial trees or send flowers to the family in memory of Arlene Miner, please visit our flower store.