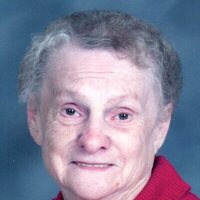 Annadell was born May 6, 1929 at Lennox, South Dakota, the daughter of Ross and Iona (Whittaker) Barber. She attended school at Lennox.

As a young lady, Annadell moved to Sioux Falls and worked at the Hollywood Theater. She married Cornelius Loewen on March 19, 1949 in Luverne, MN. They settled in Sioux Falls and had two daughters, Connie and Rebecca. Annadell was a stay at home mom while her daughters grew up. Cornelius passed away in 1993. Annadell worked at McDonalds for a short time and was a babysitter for several years.

She enjoyed playing Bingo, dominos and cards. She was known for her wonderful banana bread. Annadell spent many weekends with her family at Lake Madison.

To order memorial trees or send flowers to the family in memory of Annadell Loewen, please visit our flower store.