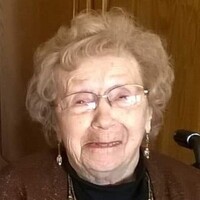 Anetta Lillian Mehlhaff was born on October 19, 1923, at the country home of her parents Emanual and Annie (Wieger) Mehlhaff, in Hutchinson County.

She was the oldest of four children in the family which included her sisters Luella and Julie, and brother John. She was baptized at the family home in 1931 and was confirmed in Bethel Reformed Church in Delmont, SD.

Anetta graduated from country school at the 8th grade level and then stayed home to help her father with the farming as was quite common in those days.

Anetta married Hugo Hartman on November 19, 1944. They had three sons- Russell, Douglas and Robert. She and Hugo raised their children and worked the family farm until 1978 when Hugo died of cardiac disease. At that time Anetta moved to Sioux Falls to be closer to her children and sisters.

Anetta was employed at Sioux Valley Hospital (now called Sanford Health) after moving to Sioux Falls and she retired in 1985. She also did some part time work at grocery stores after retirement.

She enjoyed making cakes over the years and her grandchildren remember her special angel food cake with pink glaze or her specialty caramel frosting. Anetta was also an avid crafter and mall shopper. She never found a mall she didn’t love! She also loved to play very spirited games of Parcheesi at many family gatherings.

Anetta married Edgar Goehring on April 30, 1994 and they were members of First Congregational Church in Sioux Falls. Her health started to decline in 2015 when she suffered a stroke and was admitted to Good Samaritan Nursing Home. She had the reputation there as being such a pleasant and fun person to know. She always had a smile and comical German sayings for those who took care of her.

Anetta is survived by her brother, John, and her sons; Russell (and Linda), Douglas (and Kathie), Robert (and Denise). She is also survived by 7 beloved grandchildren; Steve Hartman (and Wendy), Carey Hartman, Jenny Figueroa, Scott Hartman (and Tricia}, Kelli Hartman, Amy Kruetzfeldt (and Kelly) and Kyle Hartman. Anetta was a proud to be a grandmother to 11 great-grandchildren and 1 great-great-grandson.

Anetta lived a long, happy life and her loved ones will miss her dearly.

copy and paste this into your browser to view the ceremony, the first 6 minutes are the last part of the visitation time. Web Video: https://www.tributeslides.com/tributes/show/LM3WFXT69YTH7XDW?e=1

To order memorial trees or send flowers to the family in memory of Anetta Lillian (Hartman) Goehring, please visit our flower store.