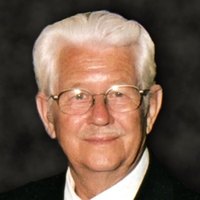 He was the first-born son of Wilhelm and Amanda Sando followed by his twin brother, Merton, on March 15, 1925. He grew up on the farm where they were born near Colton, SD.   He and his siblings were active in 4-H.  The Sando family was well known for advanced farming practices.  When Alverdo graduated from Colton High School he enlisted in the Army.  He was stationed in Saipan during WWII and was positioned to be part of invasion of Japan when the atomic bomb ended the war.  He was discharged in 1946 with many medals including a Meritorious Service Unit Award for his unit’s important contribution to the success of the Armed Forces mission in Saipan. He was known for his near perfect aim as a sharp shooter but was glad he never had to use his skills during the war.

Al returned to South Dakota and attended Augustana College where he met Nila Ann Moir.  He said it was love at first sight and this love for Nila only grew stronger through their 62 years of marriage.  They were married in Miami, Florida on April 9, 1952 only 4 days prior to his deployment to Korea.  Al was stationed just behind the front lines and remained in Korea until the end of the war.

After the war, he and Nila returned to Sioux Falls to start their family.  Al worked at the Standard Oil (AMOCO) pipeline terminal in Sioux Falls until his retirement in 1986.  Al was very involved with the Civil Air Patrol and Sioux Empire Citizen’s Band Radio Club where he served as President in the 1960’s.  He devoted many hours working with law enforcement, serving the community in times of disaster, searches for missing persons, etc. He was supported men in the SD state penitentiary through the M2 (Man to Man) program.  He also worked with young people in the Junior Achievement program.

Al Sando always demonstrated the heart of a true hero.  He never passed any person in need without doing all in his power to help them with no regard for his personal wellbeing.

The Sando household was a busy one with six children and a variety of pets!   Over 40 foster children came to know real love and kindness in the Sando home.  Al and Nila were named Foster Parents of the Year in 1977.

The Sando household was full of a variety of animals, both domestic and wild.  Nila was the one who initiated the rescues, but Al fell in love them and his soft-heart made it hard for him to say no when the next needy creature came along.

Al always loved technology and was amongst the first to begin using a personal computer, email and the internet!  He also loved photography and has blessed is family when thousands of photos of his family, nature and wildlife.

Al’s faith was very important to him.  He lived in such a way that no one who met him could miss his gentle kindness and love for others.  He and the family attended Central Baptist Church and later were a part of a small group that started a sister church, Faith Baptist Fellowship.  Al served on the board for many years.

He was a devoted husband, father and grandfather and neighbor. His faith and his family were the most important aspects of his life.  He faithfully prayed for each one of his children, grandchildren and great grandchildren by name each day.  Not long ago, he commented it was hard sometimes to remember all of the names but the Lord helped him!

In 2001, the couple moved to Denison, IA where he lived until his death.

Al leaves behind an amazing legacy to his five children, Tami (Doug) Skarin of Omaha, NE, Todd Sando of Denison, IA, Peggy (Larry) Severson of Chugiak, Alaska; Bradley (April) Sando of Omaha, NE; and Darcy Herrin, Denison.  17 grandchildren and 18 great-grandchildren.  Two brothers-in-law, Evan and Gary Moir of Sioux Falls, SD.  Al was preceded in death by his parents, his wife, Nila and their daughter, Brenda Jean and his 3 brothers, Merton, Delmar and Orllo and sister, Urma.

To order memorial trees or send flowers to the family in memory of Alverdo Sando, please visit our flower store.